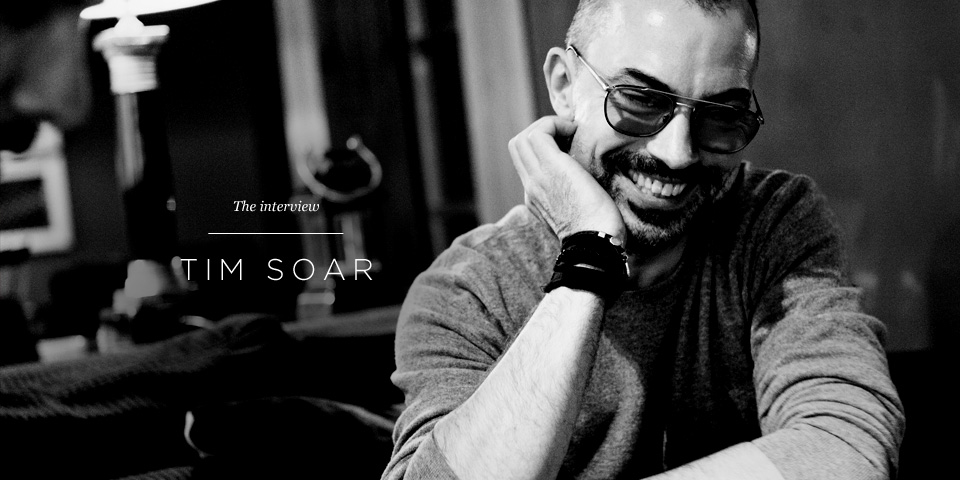 Fashion designer and creative head of Music Concrete, Tim Soar has collaborated with Aviator since its inception. He returns this month as the first guest DJ at Sky Bar.

In hindsight it was obvious that I would go into fashion, but I wouldn?t have gone down the career path I have, if I hadn?t met Neville Brody in the early 1980s and become involved with his interior and graphic design studio on Tottenham Court Road.Neville, at the time, was art director of The Face and Arena magazines. His was one of the best design studios in the country (and to my mind still is), and we were sent one of the first Apple Macs to come into the country, it was through this that I got into graphic design by just essentially playing with it and realising what could be done.

On March 30th Tim will be the first to play at Sky Bar as part of Aviator’s series of guest DJ nights.
Tim plays Sky Bar this March 30th
Find out more

I spent a lot of time on the perimeter of fashion as an unsuccessful model in the 1980s,when Buffalo was at its height and Jurgen Teller was just starting his career. I found it fascinating that the clothes you wore could change the way people perceived you ? and I realised that fashion could actually be for normal people like you and me. When I set up my own graphic design company, I found that many of my clients were in fashion, so when I set up Music Concrete, I ended up doing a lot of the music for catwalk shows. I understood the fashion language and having been involved in the industry for over 20 years, I had plenty to say, so I suppose it was inevitable that I would end up designing ? but it is lucky that the music runs in parallel.

The 1980s explosion in the London Bar scene launched my music career,I can remember the Soho Brasserie being the first time there was a bar to go to rather than a pub. A few years later a friend of mine was involved with a number of London bars, and I ended up doing a lot of DJ?ing. It?s a very immediate fix? if you work in design, be it graphics, interiors or fashion, it?s all a very considered and slow process, whereas you put a record on, mix it well and people either love it or hate it! It?s a great thing to do in parallel with traditional design.

I loved DJ?ing the Southport Soul Weekend – it had a real charm. The heart and of the soul scene in the 1970s, it was a music festival that embraced more or less anything of black soul heritage. Sponsored by Marlborough at the start of the ban, the marketing had to be creative, and they were allowed to set up an experiential music suite in a VIP room during the Soul Weekend, and we DJ?d there all night for the entire weekend, it was great. You?d have an audience of people who were really up for the music, who didn?t have the same preconception about what is cool and what is not. It was held in a ?Pontins? which also lent a certain charm to it – it was just like a shonky school holiday with a group of punters really going for it. 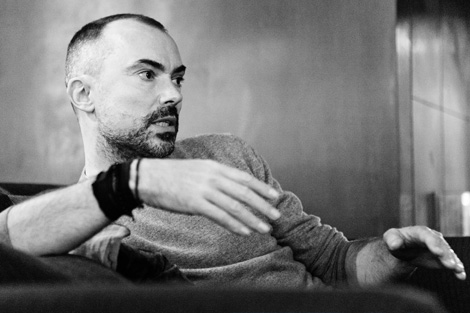 I?ve always loved Paris and always come back to it. I suppose it is the nearest capital city, and easy to get to, but I just love it. I love the architecture, the pace of life and the approach to living. It also happens to be where I show twice a year!

Paris was a league ahead of London in the 1980s for food, drink and style, but I think things have really changed now. The average London restaurant is better than the average Parisian place now, and I think Londoners today are much more stylish and better dressed. Parisians do still have that certain haughty sense of style however ? which I think is unique and very nice.

I?ve stayed in some really rubbish Parisian hotels, but actually given the choice I think I wold rather stay in an apartment. They seem to have a lot of apartments available to rent in Paris, so 9 times out of 10, I will choose to stay there, as I think you feel much more expressive and more integrated, in that you have to go out and collect your coffee and your baguette and you feel part of the community.

I wanted to do something new for men?s fashion, that was modern with tailored elements but that didn?t come from Saville Row. I dislike the over reliance of men?s fashion on heritage, it is such an easy message to put out there, and they all (the brands) do it. Sure I?m a sucker for it too ? I buy Levis and I wear Nike clothes for running, but I don?t want a copy of a lumberjack shirt from the 1920s, I want something new that says something about now. I want my designs to inhabit the intersection between sportswear and masculine tailoring. For men, it is important not to look like you are wearing a costume, and generally menswear has to be better made because you don?t have an extensive design palette.

“I?ve thought about my personal brand a lot. When I first started in the fashion business, I didn?t mention the music business at all, because I didn?t want to be seen as a dilettante.”
Spend a night at Aviator with one of ourTasting Menu packages: Find out more

Womenswear is completely different because they have a much broader palette. They have fluids, they have structure, they have frocks, and you can play with things in many different ways. I also believe that women can look like they are wearing a costume and still look incredibly stylish. I wanted to add a hint of masculinity to womenswear ? a whiff of cigar smoke, if you like.

I?ve thought about my personal brand a lot. When I first started in the fashion business, I didn?t mention the music business at all, because I didn?t want to be seen as a dilettante. I now realise that actually if you are clever you can combine those two things. Your personal brand is a viewpoint that can be manifested in any medium ? fashion, music, graphic design. The important thing is to work out what your viewpoint is, to understand what you are saying, and how you are doing it you.

It took me a long time to understand how to integrate the music business and fashion in an authentic way. The advice I give to students is to look clearly at your business and work out what that thing is. Be experienced enough to work out who you are and what you do in a profound way – questioning is a key part of it.

There is a really interesting difference between the stockists for womenswear and menswear. Womenswear is on a hugely different scale with women being adventurous shoppers, and consequently the buyers are more adventurous too. So I?m stocked in Browns, Harrods, and a website called Avenue 32 set up by the ex-head buyer from Browns. For menswear it?s in Asos and B – Store. There?s a particular way that men tend to shop ? men appreciate repetition and they like to see things a lot and take a long time to buy into a brand, but once they do, they stick to it. Women are different. Yes sure they do buy brand, but they also will just buy something because they like it. Most men aren?t like that, and generally they are very cautious fashion shoppers. This makes menswear a small and tricky market. Womenswear is still difficult, but it is a lot bigger.

I always take an iPod or iPhone when I travel, and it?s always loaded with music. At the moment I?m listening to War on Drugs ? an odd mixture with elements of Neu, The Byrds and Bob Dylan, it’s modern American Blue Collar psychedelic rock. I?ve listened to Vetiver?s last album ?The Errant Charm? a lot, and I really like Jonathan Wilson ? a very 70s California sound with a lot of Pink Floyd overtones. I also keep coming back to Soweto / Township music from the 1980s, it is such happy and uplifting music.

Spotify ? now that you can get it on your mobile phone – has profoundly changed the way I work with music and the way I source music.

When I choose a hotel I don?t like somewhere that is trying too hard to be cool and swanky. I like a personal touch, and I think a lot of that is to do with the staff and how they interact with the customers. I?m not a big fan of the grand hotel brand propositions, but I really like the staff at the Soho Grand where I stay on West Broadway ? and that makes me have a really nice experience. Staff is key ? second to the music obviously!

I?ve just come back from the fashion shows in Paris, and there is an interesting mad maximised aesthetic evolving! It?s as if you?ve taken everything out of your wardrobe and put it all on at the same time, and when it?s done really well it looks amazing! I also saw lots of clashing colours and clashing prints ? which again, carried out well can look very modern and fresh. In general I?m against trying to look too styled, go more understated. Mis-match what you wear more than you match ? if there?s anything going in this Spring/Summer ? that?s it!