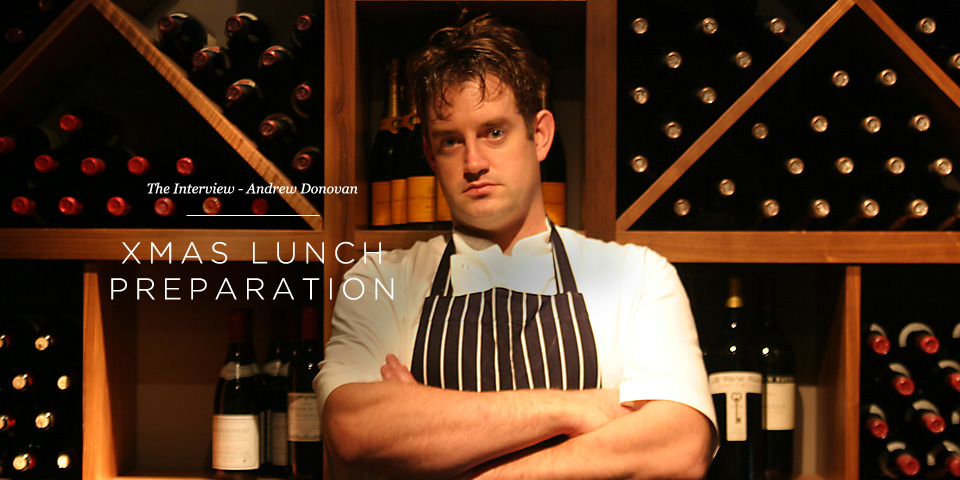 Christmas lunch is the same as cooking for any dinner party or special occasion, the only difference being that we have only one chance each year to get it right. There is a lot of pressure, because if you get it wrong, you mess it up not just for yourself, but for your children, your partner, and your partners? parents and so on, but I think people put a lot of needless pressure on themselves.

The secret is in the planning, particularly if you?re not used to cooking a large joint of meat or a large bird. The more time you spend in preparation, the more time you will have to let your hair down and that is what Christmas lunch and the day should be all about.

Some of the best tips are actually the obvious ones. Measure your oven, measure your bird and measure your roasting tray! If you are cooking for a large number of people it might be worth considering two small birds over one big one ? if you can fit two in your oven they will certainly cook a lot quicker than a large bird, and are less likely to become dry.

It is well worth getting up little earlier in the morning to prepare your vegetables. Peel all your vegetables and par boil them, then they will only need popping in the steamer at the last minute to warm them up. Sprouts will cook more evenly if you cut a cross at the base and I like them to still have a bit of a crunch about them. Also keep the fat from your bacon sandwich for breakfast, heat it up and toss the sprouts in that at the last minute. Parsnips are best kept simple as mother-nature intended ? peel, cut into quarters and remove the stalks, boil in salted water, pat them dry, and then brown in a hot pan to get a good caramelisation (about 2/3 colour) before adding some butter and honey ? delicious. We like to serve a parsnip crisp with our Christmas lunch at Aviator as it adds a nice bit of texture.

My tips for roast potatoes are to boil them for five minutes , then sear them on the top of the stove in duck fat with a little garlic, rosemary, thyme, salt and pepper. The key is to use a really good rock salt to crisp them up. It?s best if you can get 2/3 of the colour on them before you put them in the oven ? that way you reduce the cooking time.

I think Christmas stuffing should be over the top and has to explode with flavour ? but it?s all about personal taste ? I really like cranberries so I will be putting cranberries in mine. I will start with some onions and garlic and sweat that down with some sage, then I?d add some of the very best quality sausage meat that you can buy ? we are very lucky as we have Turners & Sons just down the road who bring us a superb sausagemeat. Into that we add dehydrated cranberries which have been rehydrated in water as that makes them really sweet ? fresh cranberries can be very bitter.I also add apricots which have been rehydrated, and also chestnuts and pistachio nuts. I don?t think stuffing the bird traditionally is the best way to cook a stuffing as even the best sausagemeat will dry out eventually. I think the best thing is to make your stuffing into a sausage wrapped tightly in tin foil and just cooked in the oven for 20 minutes. If you get the tin foil really tight the stuffing shrinks a little while cooking and comes out as the perfect sausage, which you can then serve sliced into rounds.

“Then, being as Christmas is a time for excess, I?d get some butter and a little bit of grated truffle…”

I would suggest cooking the turkey as a crown, boning out the leg meat.. If you?re not confident boning out the leg, you can ask your butcher to do it. We have a large stockpot at Aviator, so we can boil the crown in stock which not only kills off any external bacteria, but it also seals the shape of the breast and starts to get the heat in there which means it needs less time in the oven and so stays nice and moist.Then, being as Christmas is a time for excess, I?d get some butter and a little bit of grated truffle, and stuff that under the actual skin, then wrap the crown in really fatty streaky bacon and pop it in the oven. It will only take about 40 ? 45 minutes ? even a really big bird will only take up to an hour and a half max. I would take the bone out of the legs, then beat with a tenderiser, season, and then roll in lightly buttered foil and cook in a hot pan for five minutes before adding to the oven with the stuffing roll. Have your oven at about 170 ? nothing too hot as you want a lower heat so that it permeates the flesh and doesn?t dry out along the way.

Bringing everything together is really quite simple. Your legs and your stuffing have been cooked in foil so they will retain heat. Take the potatoes, parsnips and the turkey crown from the oven, and the potatoes and parsnips can be kept under a low grill, just to keep them warm. To make the gravy, I would actually use a little chicken bisto, although you can of course use a good quality chicken stock from the butcher. Add a little Madeira, boil that up and add a little cranberry sauce for sweetness, then bring to the boil with all the turkey juices and any that might seep out of the turkey crown.I would also cut the end off the leg and add any juices that come out of there. Whisk and strain the whole thing and you?ve got a beautiful gravy. I really wouldn?t worry if you?ve got fat in there as it really adds to the flavour – the French call it a Jus Gras ? it?s stunning.

I use Brioche for my Bread Sauce. If you think about it, brioche is just enriched bread dough, it?s more buttery. To start with, I infuse milk with some nutmeg, a clove, a little bit of a bay leaf, some thyme, salt and pepper, then bring it to the boil and let it cool down. While it?s cooling down take the crust of the brioche, blitz up in a food processor, or tear into smallest bits you can, strain your milk off and add a knob of butter. It is probably easier to do this one at the last minute, even half an hour before. You can do pretty much everything in advance, but some things are better left.

We will use about 2,000 Christmas puddings at Aviator this December. If you want to make them they really need to be made in January and fed with brandy throughout the year and I?d need a vast cupboard to house that lot! I do also like a mince pie though ? served with a lot of clotted cream and a splash of whisky.

My most memorable Christmas dinner was a few years ago when I bought a suckling pig that was about three weeks old ? the cutest looking thing you ever saw. We rented a cottage in Devon, and I deliberately put it in the fridge with its little head looking out. Unfortunately everybody saw it and refused to eat it. So I ate a whole suckling pig, stuffed with quince ? it was beautiful!

If I didn?t cook a turkey I?d cook a Goose or a Capon ? I think they have more flavour, but a Norfolk bronze is definitely the best turkey.

We?re adding a Truffle risotto to the menu at Aviator cooked with Perigord truffles. It is stunning and a piece of culinary indulgence.

Stilton really is the best cheese for Christmas because it takes 6 months to mature. If you think about it the grass is as its best bang in the height of summer so 6 months later is the best time for the cheese, hence why it is traditional. My tip is if you can afford a whole Stilton, take a scoop out of the middle and pour some port into it, or if you want to go really over the top, take a Brie de Meaux and slice a load of truffles over the top.

Any leftovers should definitely be made into a curry ? or coronation chicken. Who?d want a pie?