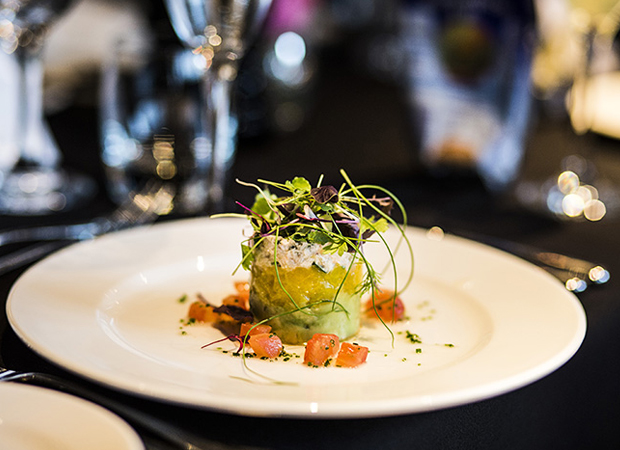 We caught up with Poppy Dinsey again, blogger and founder of WIWT.com who chose Aviator as her wedding venue in 2014. In this edition of the Journal, Poppy reflects on how she came to choose her delicious wedding menu and also serves up helpful advice to all those planning for their big day.

?If you?re ever at a particularly stressful stage of wedding planning then remember this: for every guest-list related meltdown there?ll be a meeting where all you have to do is eat cake or drink champagne. These food based outings are the best ones. Forget what you?ve heard about ?the magic? of dress shopping, choosing a favourite wine is better. 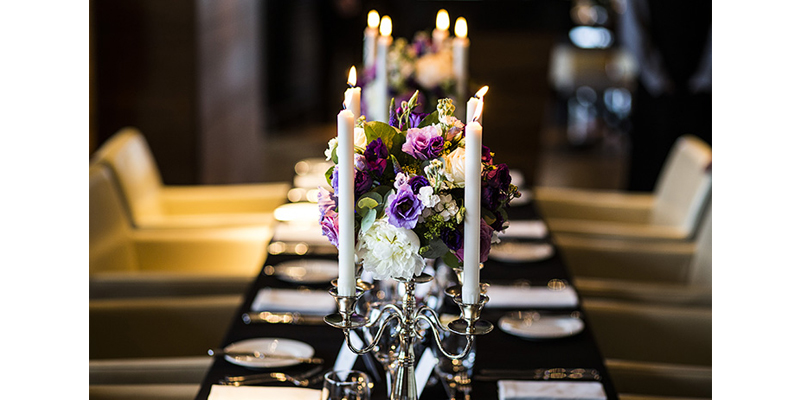 I suppose what I liked most about the food and booze parts of wedding planning (apart from the obvious eating and drinking element) was that these were always appointments we did as a couple. They were like really fun dates. Free dates, even! (Okay I know that we were picking up the bill eventually as part of the overall wedding charge, but walking away from a table of booze without paying there and then still feels pretty baller).

One of the many reasons we wanted to get married at Aviator was that we knew how good their menus were. On the occasions we?d been before the food had always been modern, interesting and ? most importantly ? bloody delicious. It was crucial to both of us that we didn?t have boring wedding food. We wanted our menu to reflect the type of food we?d want to order in a restaurant on a night out.

Because that?s the thing with wedding menus, they usually ARE boring. It?s understandable of course, they?re mass catered events where nobody gets to choose what they want which leads to hosts choosing the safest option from an already uninspiring list of choices. But I really didn?t want that for our wedding. I like food too much.

I actually wanted to get on with choosing our menu right away, but Aviator advised us to wait until the autumn so we could sample the most seasonally appropriate dishes for our October wedding. (Big tick already!). As the wedding got closer we were given a long menu to peruse and then we were asked to decide two dishes for each course that we?d like to sample.

Being veggie, I wanted to try the vegetarian options as well rather than just say ?sure, something with mushrooms, whatever? so we ended up having a comical feast of a lunch where we had three starters and three mains?as well as two desserts. I assumed we?d be given smaller sample sizes of the dishes, but they wanted us to see the dishes exactly as they?d be plated up at the wedding (another big tick!) so the portions were massive. It was a great, greedy day.

We also took the opportunity to sample as much of the house wines as possible (for research) as well as choosing a couple of dedicated wedding cocktails that would be available after dinner.

Eating it all was very easy. But choosing the final menu? Less so.

We started to ask close friends and family what they thought, but this only made things more confusing. (Something you?ll come to realise very quickly with wedding planning!). There did seem to be a theme though: a lot of people said they wouldn?t choose scallops for a mass menu but that they would choose scallops if it was just for them. In fact, I think everyone that we asked said that. This kinda highlighted to me exactly what I already thought: people choose the safest/blandest option when it?s for a crowd because they think people will make a fuss when actually, most people really won?t.

After much deliberation our final menu was?

And it was just heavenly.

People didn?t stop talking about how good the food was all night. Even at Christmas people were still going on about the pork belly!

Of course the time of year will affect your choices, but it?s also worth thinking about the time the food will be served. We knew we wouldn?t be eating until 7ish and we decided against canapés, so we wanted a proper three course dinner as opposed to a lighter lunch. There wasn?t going to be an evening buffet either, so we wanted people to feel like they?d had enough to eat during the main meal itself. We did do bacon rolls and egg rolls at midnight, but I didn?t want people to be depending on those for fear of passing out.

I?m really pleased we didn?t choose chicken just because ?everyone likes chicken?. Of course you have to think about your guests, but I also think you should really *love* your wedding menu as the bride and groom. I had my favourite things, Stephen had his favourite things. THERE WAS STICKY TOFFEE PUDDING FOR GOODNESS SAKE. And it was all just wonderful.

Definitely make the most out of any tasting sessions you have, they?re the one part of wedding planning that you WILL miss when it?s all over!?

If you?ve been inspired by Poppy, contact our weddings team or why not join us as we host The Luxury Wedding Show on Sunday 20th March.