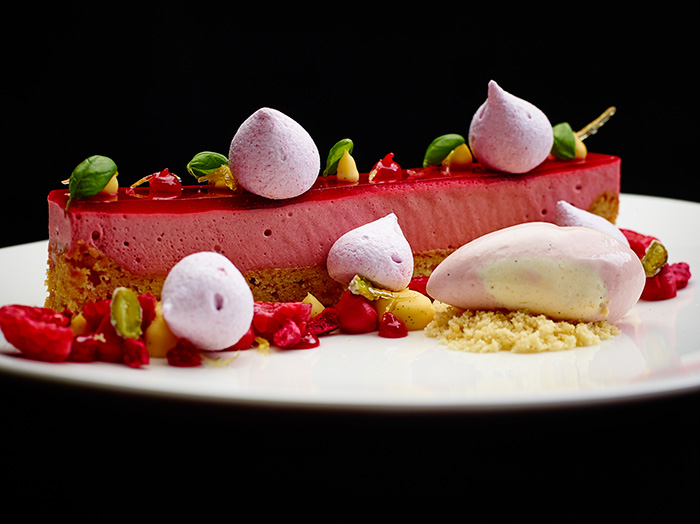 On the menu – Raspberry Breton

Following Aviator?s unintentional French theme in this month?s Journal, the Raspberry Breton is On the Menu and one of Aviator?s Pastry Chef Greg Cadoni?s favourites, inspired by the elegance of classic desserts found in patisseries all over France.

?In the past I have mainly produced this dish in the form of a cake but for Aviator, I wanted to adapt the recipe and alter some of the elements to create a delectable plated dessert highlighting some of the charming qualities you find in classic French baking. My intention with the Breton and inspiration behind its name was to bring a touch of France to Farnborough!? Greg Cadoni, Pastry Chef.

The dish is made by laying a base made of aerated shortbread (hence the dish?s name ?Breton?, which is a region in the North West of France famous for shortbread) before a layer of sugarless raspberry mousse is applied. The raspberry mousse is made in a similar fashion to a crème patisserie, before it is aerated with egg whites and fresh cream and set with a thin coating of raspberry jelly over the top.

The sugarless mousse gives Greg the flexibility to bring in other sweet touches to the dish without overpowering it, including a quenelle of ice cream and apple pearls, created from apples poached in fresh apple juice. To ensure the dish is not supersaturated, a number of ingredients are used for balance such as salted pistachios and lemongrass curd, the latter of which, usually used in Thai cooking, complements the raspberries with its strong perfumery notes.

The Raspberry Breton is finished with vibrant micro basil leaves to add colour to the presentation and the notion of summer to the taste.