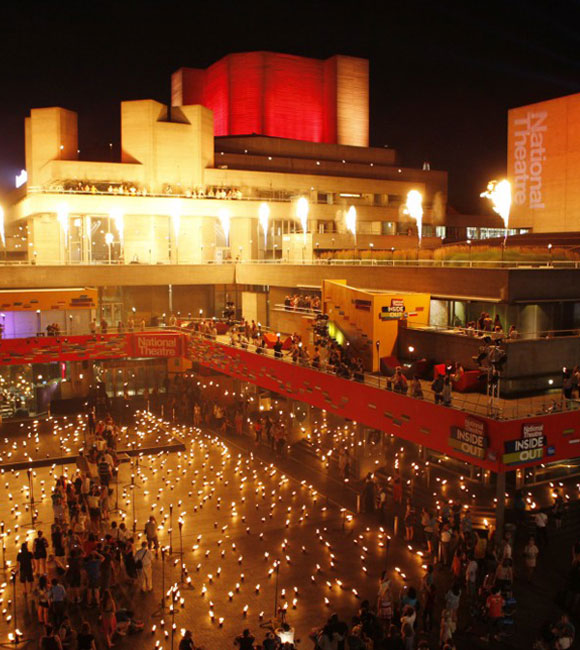 Artist and Sound Designer Thor McIntyre-Burnie talks to Aviator about his passion for site-specific art, its connection with sound and his involvement with Farnborough?s first multi-sensory art exhibition, The Wind Tunnel Project.

Born in London, I grew up all around the place. I lived in Australia from the age of 7 to 14, before coming back to reside in Cornwall for a while. I was used to moving around a lot. My early years in Australia were the most informative and probably what influenced me to do what I do now.

I studied Fine Art as a degree at a university in Staffordshire and at the time the course was quite was unusual. Their emphasis on philosophy was that your ideas came before the medium so that you didn?t become fixed in any one discipline. In fact if you went there as a painter, you had quite a hard time as you had to explain why you would be painting on canvass, why you?d use a brush or even why you?d use paint as opposed to other methods and some people found that really challenging.

The reason I liked it is because the materials and medium you work with have an effect on whatever you are creating. The ideas and the medium have to work together. 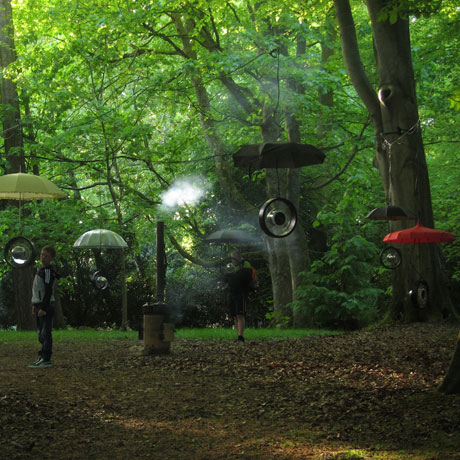 I spent a lot of time looking at television as a physical medium, pulling them apart and making sculptures with the parts. Working with photography, video, sculpture and sound, I started to look at the complicit world between vision and sound and what happens when you separate the two. If you experience sound on its own for example, you automatically go in search for its complicit partner, vision. Once you?ve accepted there is no vision, you set out to create your own, interpreting the sound and thinking about the source of the sound or the space, object or environment it?s in. This is how my journey started, from doing a fine art degree into working with sound, spaces and sites.

Ultimately, there are two veins to what I do. One as an artist working on site-specific installations and projects that are more art orientated and the other is sound design for performance and theatre. Generally with sound design, the majority is for site-specific projects or shows in interesting and odd environments. It?s these abstract environments that I enjoy working with the most, especially when there is a large creative team. Where art installation is concerned, I haven?t really pursued galleries partly because I find working with sites and spaces more interesting and I believe this is the very reason why galleries are starting to work off-site more and more.

One of the installation projects I?m currently working on is called ?The Speakers?, on the Island of Terschelling at the Oeral Festival. Running since 1982, the Oerol Festival is one of the most exceptional land based, site-specific art festivals in Europe. It literally transforms the Island of Terschelling into a cultural hub. The installation is of about 16 sculptures, which are suspended in mid-air using wire. Each one features a voice of a person reading a collection of live Tweets from an event around the world. The idea is to track different events and to get ordinary people, not actors, to voice their opinions.

I first started with Tweets from the Egyptian Revolution from 2011 at Tahir square in Cairo. With the installation you can walk between the suspended ?speakers? and listen to the Tweets. It?s all about putting the Tweets into a real human context through real human voices and transposing two places so someone else?s reality in Egypt can be transposed into a square in Budapest or in London.

It?s a touring sound and art installation and we?ll be visiting different art festivals around Europe with it. We?ll be going to La Strada Festival in Austria in August, the Place Festival in Budapest in September, the Samhain Festival in Belgium in October, and hopefully the South Bank and Oxford Festivals in November.

I personally, don?t follow any artists or regularly visit art galleries. I tend to like art that is sound based and I like physical, tangible art such as installations and sculptures. What I would say though, is that sound design and art cross over a lot more than you think. Traditionally sound design didn?t come from the art industry, it came more from theatre. Sound design is a massive industry for example the sound design for Harley Davidson motorbikes is copyrighted, they sound design crisp packets so it?s a vast field, whether sound design for food, or for film or theatre or museums. The connection is stronger if you?re working with a site. An immersive interactive art installation demands sound as a partnering element.

I recently worked on a choreographed piece called ?Rights of War?. It looks at how we?re 100 years on from WW1 and just about to finish our withdrawal from Afghanistan. Both events book end each other and ?Rights of War? transposes stories from one to the other. The BBC?s War Correspondent in Afghanistan was part of the creative team, which was unusual and together we were looking at history, stories and accounts, while the choreographer translated them into dance and movement. So immediately what started as a historical project, quickly turned into an art concept, and a very abstract one, that crosses over with sound, art and design, all whilst maintaining factualism.

Where ever I go, I?m constantly sourcing my inspiration. I respond to sites and places and if I?m working with a location, I?ll invariably spend as much time there as possible trying to get to know it, trying to see how people use it and how the spaces function. For me, different places offer different sources of inspiration.

While I?d probably not return, the thing I miss the most about Australia is the relationship you have with your environment. There is so much cultural history from the Australian Aboriginals to the vast landscapes. I miss being able to wander around with never seeing anyone you know. You can?t really do that here.

Sri Lanka is one of my other favourite places to visit. I was there for about a month earlier this year so I spent a lot of time getting to know the place. Working in Beirut, Lebanon, was another fascinating place. Because I?ve done so many site specific projects and worked at lots of interesting sites, these must be up there in the top five. These countries just immediately left an impression with me. They are both really quite astounding.

And it was while out in Sri Lanka working on a project for the Columbo Art Biennale when I received an email from Artliner saying that there was this Wind Tunnel Project, which they were working on with other artists to do a project in a space, and they asked whether I?d be interested in working with them. I immediately fell in love with the photos of the spaces they sent and accepted the job.

As soon as I came back from Sri Lanka in February, I completed a site visit of the Wind Tunnels. One of the first things that struck me was the large Q121 building. It?s almost like a cathedral, it has that awe inspiring quality and the scale of it is crazy. You feel tiny and insignificant standing beside it.

Working on the ?Rights of War? piece recently made me more intrigued. I was particularly interested in how these Wind Tunnels were built in the inter-war period, the effects of WW1 on society, what happened in that period between the wars and how it affected people?s mind-sets. It was such a pivotal point in time. My initial proposal came out of spending just half a day in this space.

Quite often, the best spaces for sound and art installations are those that are quite dysfunctional, derelict or abandoned. The Wind Tunnels have been closed and hidden from public view for over 40 years and having the opportunity to work on a project to bring these non-functioning Wind Tunnels back to life and reopen them to the public after all this time is just amazing.

I?ll be working on the Q121 and R52?s bases specifically, largely with sound but also with a sculptural element of trying to see how we can reactivate these spaces in a different way. What I?m introducing I suppose is a site specific installation that complements and appreciates the spaces; trying to be more subtle rather simply displaying art in a traditional form.

Sound is a lovely way of working with an environment, buildings and places because you can really change the way a building feels, change the way you relate to it and change the way you explore it. For example, sound draws you round the corner, it creates an environment, a mood, and depending on what the structure of a space is like, sound in that particular space will project differently than if played or performed in any other space. Part of what we are trying to get people to do is explore these spaces for the first time but using sound to enhance that and help bring out latent qualities that are in the buildings, whether it?s the history or looking at flight as a phenomenon.

I?ve been trying different recordings in the space but kept coming back to sacred sounds, until I stumbled across something quite extraordinary. On the night of 19th May 1942, the BBC visited a wood in Surrey to nightingales singing, something that had become an annual tradition. However, this year was different. As the BBC staff prepared to transmit the nightingales, a flock of Lancaster bombers appeared overhead and the live broadcast had to be pulled. Luckily, they kept recording and a poignant recording of the moment has survived history. It?s the noise of the peaceful nightingales in the garden followed by the gradual bellow of the Lancaster Bombers coming in that really takes you back to that period when you listen to it. I also feel that it in many ways embodies the dichotomy and wonder of flight.

I played the recording in the Q121 building and with the incredible acoustics in the building the sound just brought the whole environment to life. The drones gradually start to fill the whole space and it becomes a really intense thing. With this as the foundation, I decided I wanted to combine it with working with local voices of people who used to work in the buildings. I managed to find a local choir master who worked in several choirs who?s managed to pull together a group of ten guys, half of which used to work here and others who were involved with the buildings in some form. It was a trip down memory lane for many of them. I recall one of the gentlemen saying, ?Never in my wildest dreams that having worked here I?d be back so many years later singing in the Wind Tunnel?. I?ve been working on the idea of the group emulating the role of the bombers and in a way, putting a human voice to something that was machine. Some of this has also become a part of the wider Wind Tunnel Project, the conundrum of flight and the relationship between man and machine.

I?m hoping The Wind Tunnel Project will give Farnborough residents a link to the rich aviation heritage that is here and Britain?s involvement in the development of aviation. Hopefully we can inspire the next generation and rekindle memories of times gone by for others.