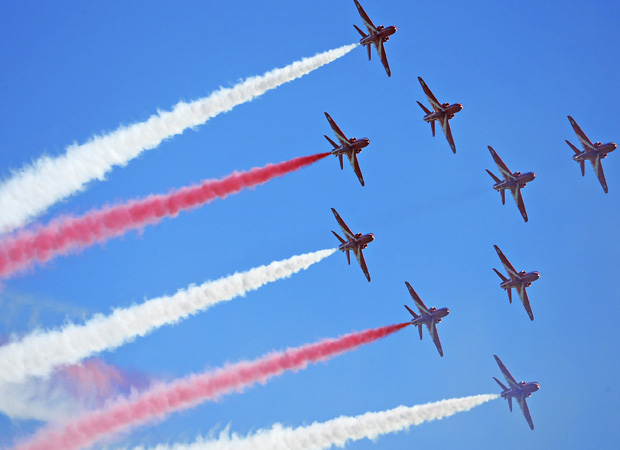 Aviator caught up with Flight Lieutenant Steve Morris, Red 6, of the Royal Air Force Aerobatic Team,the Red Arrows , on how it feels to be the Synchro Leader and one of two pilots who flys some of the most dynamic and popular parts of the Red Arrows? display, including the infamous Heart.

Please could you tell us a bit about yourself and your background?

I have been a pilot since joining the Royal Air Force in August 2002. I have been fortunate enough to have flown fast jets throughout my RAF career. My first major tour was as a flying instructor on the Hawk TMk1 at RAF Valley. After that, I went on to fly Harrier GR9s before converting to the Tornado GR4 in 2011 when the Harrier was retired. I joined the Red Arrows in 2012, with 2013 being my first display season. During my time on the team, I have flown in the Red 5, 7 and 6 positions.

Why did you become a pilot?

Ever since I can remember, I have wanted to become a pilot and have been fortunate enough to pursue this passion in the RAF. I don?t come from an aviation family, nor a military one for that matter, but have been supported 100 percent throughout. I have a degree in Aerospace Engineering which was not necessary to become a pilot but has certainly helped me in certain areas along the way.

Performing aerobatics is one of the most exhilarating experiences you can ever imagine. 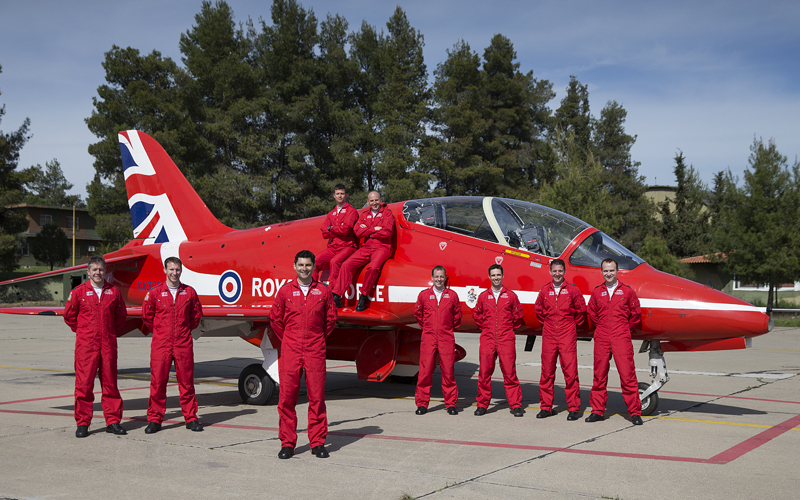 Describe what it feels like when performing the loop the loop through the sky?

Performing aerobatics is one of the most exhilarating experiences you can ever imagine. Performing aerobatics with eight other aircraft around you is something that takes time to perfect and never gets tiring! There is a large amount of trust amongst us all and we are greatly privileged to perform in front of huge numbers of people each year.

There must be hundreds of different manoeuvres you can perform in the sky. What is your favourite manoeuvre and why?

My personal favourite manoeuvre to perform is the Heart. This is for a number of reasons ? it?s very iconic and takes an awfully long time to practice and get right. It only takes a small error in technique from either member of Synchro for the Heart to be misshaped and look more like a potato!

What does it take to join the Red Arrows?

The Red Arrows select two or three new pilots each year. In order to apply for the team you have to have at least 1,500 fast jet flying hours, you must have been on an operational squadron and you must be classed as above average or better in your flying role. Once you apply the team shortlist nine applicants to attend a selection week during their Spring training. This selection process includes a formal flying assessment, an interview and a week of peer assessment. At the end of that week, the current team pilots get together and have the privilege of selecting the new pilots for the next year.

What are you most looking forward to during the 2016 season?

2016 is a very special year for the team and there is an awful lot to look forward to. The domestic season is always great and we get to display in front of some huge crowds, particularly at shows such as the Royal International Air Tattoo, Bournemouth and Sunderland. There are also occasions when the team is tasked with representing the UK at events abroad. This is hugely special. There is nothing better than showcasing the best of British at home and overseas.

How do you train for the season?

Training for the display season takes six months. We start in October and aim to fly three times a day, five days a week. At the end of this winter training period, the team heads to Greece to spend six weeks training in the better, more consistent weather and more challenging display venues. At the end of this intense period, the team is assessed over a few days and are awarded their display authority. It is at this point that the pilots get to wear their distinctive red flying suits and the engineers and support staff get to wear their blue suits.

When you are not taking the sky, what is your favourite way to unwind and relax?

The flying the team performs is intense and to unwind I enjoy all sports, especially cycling. I also have two working cocker spaniels that keep me very busy and being out with them is a fantastic way to relax.

How can people find out more about the team?

Hopefully, people will get the chance to see one of our displays this year. Often, we have a Public Relations team on the ground at these events, where people can meet members of the Squadron, collect brochures and find out more information about the Red Arrows and Royal Air Force. Other ways people can follow the team are on online ? visit our Website, or follow us on Twitter or Facebook ? RAF Red Arrows.