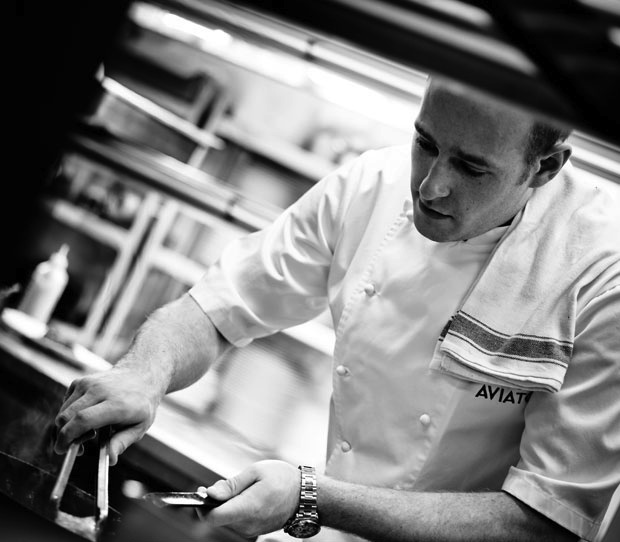 Executive Chef Luke Wheaton discusses how his passion for cooking started and reveals what he can?t live without in the kitchen.

I?ve always been around food. I grew up with fresh, authentic, rustic food at home. My father is Italian and was Head Chef at several Italian restaurants in our home town. As a child, I used to visit him at work before and after school in my uniform. Only coming up to his waist in height, I remember being mesmerised by the kitchen and how much passion and energy he put into making each dish perfect. My father is a huge inspiration for me and for many of my recipes and creations so I?m often reminded of him when I am in the kitchen.

My professional career began when I enrolled onto an apprenticeship scheme with the Academy of Culinary Arts, which included three years at One Aldwych. I cooked under the management of Executive Chef Mark Gregory MOGB. Being a hotel chef, I look up to Mark a lot, for the way he approaches tasks in the industry, the way he manages a kitchen and the way he deals with food and suppliers. He taught me a lot, especially through the One Aldwych philosophy; the better you treat your staff and the more you put in to your staff, the better they?ll look after your guests. This has stuck with me and I think it really works. I was lucky enough to have been promoted twice during my time at One Aldwych, once to Demi Chef de Partie and then again to Chef de Partie. And, through Mark, I also managed to do some stints at the Savoy Grill and with Gordon Ramsay.

One thing I?ve seen along the way is that chefs spend a lot of time thinking about how food is presented. Don?t get me wrong, I think this is important but I don?t think about the design and theatrics first. For me, it?s more about flavour, putting the ingredients together and making sure all components work together, ensuring no one flavour is more dominant than the other and doesn?t overshadow anything else. There?s no planning to my plating style. Once the dish is cooked, I plate it the way I think each element will be shown at its best.

Having worked in outside catering, with the likes of Rhubarb Food Design, Mustard, Blue Strawberry and Table Talk, and catered for events such as Wimbledon, the Royal Box at Henley Regatta and the Quantum of Solace film premiere, I decided to get back into fine dining. I went to work at The Ritz, under the management of Executive Chef John Williams MBE, where I stayed for a few years, slowly working up the ranks. John was Chairman of the Academy of Culinary Arts, where I trained and his background also includes Maître Chef de Cuisine at Claridges for a number of years before moving to The Ritz. An icon in the hotel chef world, he was regimented, disciplined, determined, traditional and fantastic to work for and learn from.

When looking for a supplier, I think the number one priority should be that they are local, ideally from within a 50 mile radius. 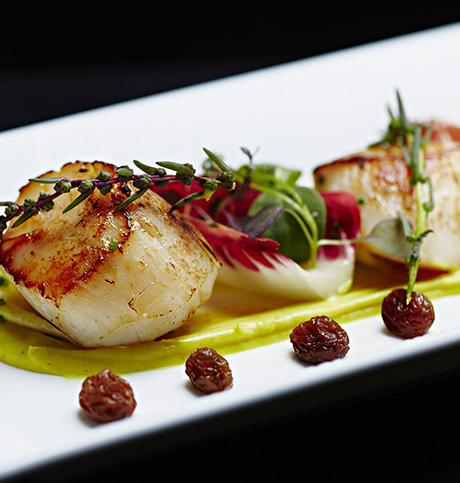 After experiencing the modern, minimalistic style at One Aldwych as well as the traditional and classic style at The Ritz, I found my flair fell somewhere in between. I try to be as creative as possible without going over the top. It?s more important to match types of food that work well together and being able to show ingredients off at their best. I think a lot of that is down to where you source your produce.

I have a little black book of suppliers who I tend to call upon. I have three specialist suppliers in each area for example three for smoked salmon and three butchers. When looking for a supplier, I think the number one priority should be that they are local, ideally from within a 50 mile radius. Number two is that the produce is fresh and my final priority is flexibility. I need a supplier who is able to delivery daily to ensure ingredients are kept at their freshest. It?s because of this that I?ve started to work closely with foragers who walk locally and pick from the wild. In my opinion, all chefs should be aware of and try and get a better understanding of foraging. It?s important we utilise the best of sustainable British produce.

My favourite dish on the new Winter Tasting Menu we’ve developed is the Blackmoor Farm venison.

To develop my own food style and reputation, I decided to branch out and open up a pub, the Brown Dog in Barnes was my first, where we won a few awards including The Best New Gastro Pub in Time Out and we also received a Bib Gourmand from the Michelin Guide. Then came the Duke of Wellington in Marylebone before I opened a third in Windlesham, Surrey after having been head hunted by a regular customer.

To keep up to date with the latest trends, I regularly dine at other restaurants. I also stage in different restaurants to see what they?re doing. Most recently I was in Dubai and next year I?m hopefully going out to Copenhagen to do the same at Noma. I do this to keep on top of what other chefs are doing but it also helps me develop and evolve my own style.

The style of my food is modern British with some European influences and it?s something that I?ve managed to implement and grow at Aviator. Coming from Bournemouth, I?m very much an outdoors person. So when it comes to inspiration, I source mine from the seasons and growing my own fruit and vegetables and I?ve incorporated these elements into the menus as much as possible.

My favourite dish on the new Winter Tasting Menu we?ve developed is the Blackmoor Farm venison with parsnip puree, stewed cranberries and candied chestnuts. Sourced from a local, family-run Hampshire game farm, I chose the 100% free-range venison for its seasonality. The venison is accompanied by sous-vide cooked wild parsnip puree. Placed whole in a vacuum-sealed bag, we combine the parsnips with cream and seasoning, and submerge them in a water bath for approximately 48 hours. Once cooked, the parsnips are blended to form a smooth and silky purée. The dish is then garnished with locally-foraged dandelion leaves, candied chestnuts and stewed cranberries.

For me, this dish optimises rich, indulgent winter dining, combining seasonal ingredients with classic flavours and textures. I tend to create all my menus based on the fruit and vegetables that are coming into season and blossoming and this will be even more so when we install a kitchen garden at the hotel. I?m really looking forward to being able to access fresh produce right on our doorstep.

But, I have to say, my biggest culinary guilty pleasure is pizza, not the fast food version. Having grown up with Italian food, homemade rustic pizza was on the menu for dinner for several nights in the week. He used all the freshest ingredients and made the dough by hand too. So I suppose I shouldn?t be so guilty after all.

My father didn?t need fancy equipment to create fantastic food. But nowadays, with the increased demand for consistently high quality and at a faster rate, we chefs tend to rely on our trusty gadgets. For me, it has to be my Thermomix blender, our Josper oven, Clifton water bath and pressurised Elro bratt pan, which reduces the time taken to create sauces from between 36 and 40 hours to 6 and 8 hours, but most importantly it?s pressurised so it keeps the all flavours locked in.

But even with the most expensive gadgets and qualifications, I think the skill to cook well is something you?re either born with or not. I also think a lot of it is down to the right attitude and willingness to learn and develop. It?s easy to be trained to cook well but the natural talent of producing new dishes and putting ingredients together requires passion and vision.