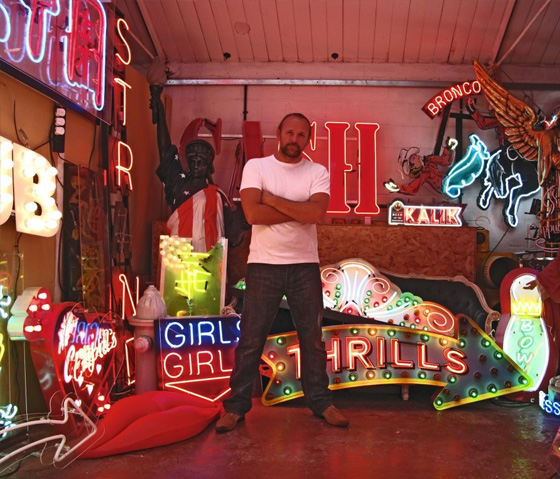 In the diary – Chris Bracey at Scream

Having created striking and dramatic installations for the likes of Stanley Kubrick?s Eyes Wide Shut, Tim Burton?s Charlie and the Chocolate Factory and most recently for the ?David Bowie is? show at the V&A, you won?t need a neon sign to recognise this name. Much of Chris Bracey?s work pays homage to popular culture from the streets of Soho and can now be seen in his first solo exhibition at the Scream gallery in London.

With a career spanning over 30 years, a fan base that includes Jay Z and Elton John and having produced work for the likes of Vivienne Westwood, David LaChapelle and Stella McCartney, you could say Chris Bracey knows a thing or two about neon signs.

A former miner from Wales, Chris Bracey?s father was a neon sign maker and the majority of his work was commissioned for fairgrounds and amusement parks. Inspired by the vibrancy of Soho in the 70s, Bracey joined his father in the family business and began making iconic signs around the themes of tattoo art and rock and roll.

Bracey?s exhibition at Scream brings together a selection of his new work specifically dealing with themes of heaven and hell, which is a metaphor that Bracey uses for his diverse biographical journey. An immersive installation of a dagger smashing through a window into a large neon heart provides a striking entrance to an exhibition that has no fear in raising questions about the role of spirituality and morality in society.

Chris Bracey?s ?I?ve looked up to heaven and been down to hell? exhibition is at the Scream Gallery from 12 April to 1 June. For more information, visit www.screamlondon.com.