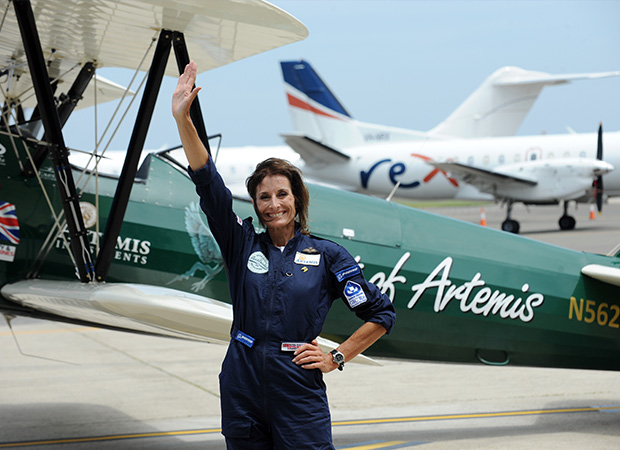 Adventurer and aviator Tracey Curtis Taylor also known as ‘Bird in a Biplane’ speaks about her epic 13,000 mile journey from Farnborough to Australia in a vintage Boeing stearman.

Please could you tell us a bit about yourself and your background?

In 2013 I flew from Cape Town (South Africa) to Goodwood (UK) to celebrate the pioneering flight of Lady Mary Heath in 1928, the first person to fly the route solo. The flight took two months to complete covering 10,000 miles over 38 stops. Following the Africa flight, it felt natural to pay homage to Amy Johnson, one of the true British pioneering aviators, who became the first female pilot to fly from Britain to Australia in 1930. My flight in 2015 covered 14,600 miles and took in 23 countries with over 50 stops. We then shipped my Boeing Stearman the Spirit of Artemis to Seattle and will retrace the historic air mail routes to celebrate the Boeing Centenary in 2016. We?ve now set off to cover close to 5,000 miles and are due to finish in Boston in late May to complete the world tour before I return the plane to the UK.

Let’s start at the begining of the idea to make the world flight. Was it one conversation, did someone or something spark this idea? Or was it the natural progression of your adventurous spirit?

When somebody asked me in 2009 what I most wanted to do, it crystallized something that I had always wanted, which was to fly Africa in an open cockpit biplane and relive the magical scene of the Tiger Moth flying over the Great Rift Valley in the film ?Out of Africa?. And I knew back in 2009 that somehow I would achieve this goal. It took another four years to pull everything together in terms of finding a suitable plane, the right sponsors and the right team to make something of this magnitude a reality. But these flights are the culmination of 30 years of flying classic planes and it truly is a rare experience to see the world from this unique perspective ? it is the view of the Gods.

But the flights have become so much more than simply the journey or the adventure. What has become more important is to use the flights as a platform to talk about women in aviation and engineering. Not only to tell the stories of the pioneering aviators of the Golden Age of aviation in the interwar years, which inspired me and whose stories I feel are still relevant for the youth of today, but to talk to young women and girls all over the world about equal opportunity, human rights and the importance of expanding the presence of women in aviation and engineering through STEM education. The flight has really become a metaphor for the need to give women the wings and freedom to make choices and to follow their dreams, whatever they may be. 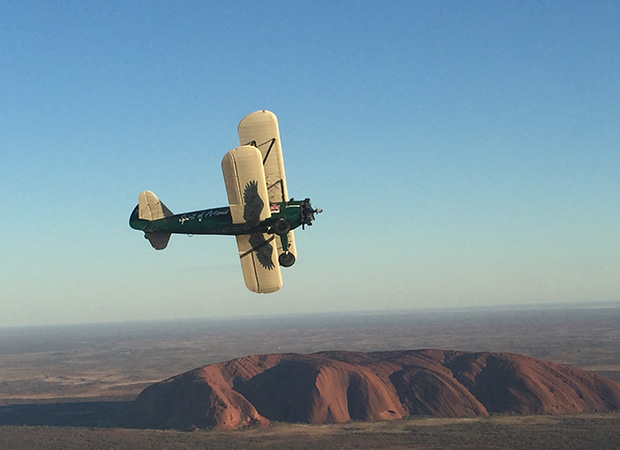 Tell us about your Stearman. Why have you chosen that make and model for the flight, and how has the plane performed so far in the world flight? How has being in an open cockpit airplane worked out regarding weather?

Having made the decision to fly Africa, I was only ever going to do it in a Boeing Stearman, the ultimate biplane in my opinion. They are wonderful, strong, reliable machines and the Spirit of Artemis hasn?t skipped a beat in all of our adventures, taking everything in its stride. The plane is the love of my life, gorgeous to look at and beautiful to fly. It took me a while to find the right one, but in 2012 I found 3G Classic Aviation, an Austrian company based in Hungary, who specialize in Stearman restorations and we were able to take the original 1942 model and create something beautiful. I wanted it in British Racing Green to make it a little more feminine and a little bit more period! And I think it looks glorious and classic. It ended up winning the Concourse for best civilian aircraft at the Royal International Air Tattoo in 2013, one of my proudest moments.

I am accustomed to open cockpit, stick and rudder flying ? it?s all I do. You are exposed to the elements and it can be brutal whether in hot conditions where you get scorched by the sun (I have resorted to put rags over my nose to prevent burning) or equally when flying through rain and storms. The biggest challenge is always the weather as the plane can?t handle hail or a major storm ? or other dangers such as birds! And as it is visual flying the weather really dictates our schedule and movement.

How was the flight funded? Have you secured major sponsors, or have there been mainly individual donors?

Boeing came onboard as my very first sponsor and have been an incredible support. It is an honor for me to fly across the US in my own personal tribute to Boeing?s Centenary.I am also supported by Artemis Investment Management, who have been a wonderful partner since 2013. We have a number of other suppliers and sponsors along the way, such as Jeppesen, Singapore Airlines, Taj Hotels, ExecuJet, Pol Roger, Inmarsat and many more ? all of whom we work closely with to deliver a schedule of activities to achieve their different goals.

Finally, I have a wonderful relationship with the British Foreign Office to help support their GREAT Campaigns. All of the Consulates, Embassies and High Commissions around the world have embraced the flights and provided so much help in telling the story and enhancing our outreach activities and publicity.

Tell me one great story about an exciting moment in the flight, something that tested you as an aviator. Any emergencies so far?

The toughest flying was probably getting through Eastern Europe en route to Australia because of the weather. A low pressure system collapsed over the whole region at the start of winter and dumped low cloud, strong winds and driving rain across the whole area in a major storm. We were keen to push on to Istanbul but we were presented with a wall of cloud as we tried to cross the Carpathian Mountains. Hugging valleys and flying at low altitude it was challenging flying and presented a lot of risks and dangers. At one point we were forced to land in a cow paddock (which I thought might be a flying strip) and a lady out picking her mushrooms had quite a shock!

How have you been treated during your overnights in various countries along the route? Has the fact that you’re female had any bearing on the way people received you and helped you on the ground?

The reception around the world has been sensational. Working with Boeing and the GREAT Campaign has meant that we were able to build a fantastic outreach programme and connect with women the world over. And many women have really engaged with the flight and recognised that it represents something special. In Jordan I was looked after by some rare female air traffic controllers and even in places like Saudi Arabia, where women have a lot of restrictions in their daily lives, the welcome was fantastic. In places like Pakistan and India I met thousands of school girls who are seeking to fulfill their dreams through education.

Have you had any time to stop and smell roses along the route? Tell us a couple of things you’ve been able to enjoy away from the airports because of this world flight.

There have been some great highlights ? Istanbul stands out for me, such a beautiful city with the unparalleled Hagia Sofia. And I was able to go visit the Taj Mahal in Agra, India. And meeting all the girls was the highlight. In Karachi, I went to a school of 2,000 girls where they were all wearing Bleriot moustaches and had little green biplanes in their hair. It was so touching.

But really the best highlights were all the experiences from the plane ? flying low over Victoria Falls and the Great Rift Valley, or over Jerusalem and dropping down into the Dead Sea and on through the Persian desert. And I will never forget flying low over the temples of Bagan in Myanmar and Phanang Bay in Thailand. All then topped off by an early morning flight over Uluru (Ayers Rock) in the heart of the Australia desert. And I know the States will deliver some similarly unforgettable experiences.

What do you think needs to be done in order for more females to make the decision to learn to fly?

We simply need to keep giving young women the opportunity and encouraging them to make brave, independent choices. The US has a fantastic general aviation community, and we need to spread the word that women and men can embrace aviation. Hopefully high profile examples of women excelling and succeeding in aviation can help drive the number of ladies who take to the skies. It is very accessible and exhilarating. GA is flourishing in this country and it?s fantastic to see.

Describe your personal satisfaction as you make this world flight. Will this flight be your legacy, or will the aviation world see more of Tracey Curtis Taylor in the future?

I can?t quite believe that I will be completing the world tour and I am aware that this may well be the finest experiences of my life. My next goal is to write a book. I have a deep passion for reading and literature, and it will be nice to take a rest from flying and tell the story of the expeditions and my life in aviation. I am also privileged to have a number of engagements around the world to speak to different audiences and attend different events, so it will be nice to continue to extend the legacy of these flights.

Earlier this week, Tracey unveiled the Cody First Flight Marker Monument in Farnborough, to commemorate Samuel Cody’s maiden flight, which was the first in British history. Tracey will also be at the Farnborough International Airshow this year with her infamous biplane.

To find our more about Tracey’s upcoming aviation adventures, visit her website.