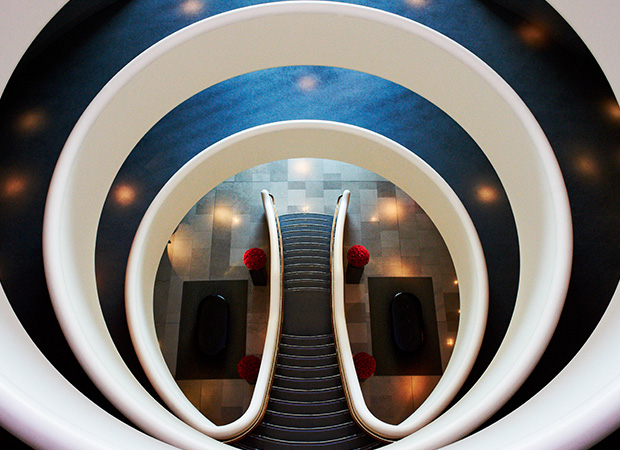 Our friends at Mr & Mrs Smith
give us the inside look at their recent stay at Aviator.

?We?re going to check out the Aviator, then??
?We?ll just be touching down for a weekend ? a flying visit, really.?
?Are these puns likely to continue throughout our stay??
?There?s a high chance ? that?s pretty plane.?
?Do I really have to come??

It?s hard to avoid dipping into aeronautics when talking about the Aviator; this hotel lives for the skies. Situated bang beside the runway of Farnborough?s private airport, shaped like a colossal jet propeller, and dotted with arty aero-biz paraphernalia, it couldn?t emphasise its love of flight more if it served food in plastic trays and stowed life jackets under the seats.

As we drive through Farnborough ? a Hampshire town that just happens to be the heartland of the British aerospace ? we aren?t sure what to expect: this is a land of conferences, handshake lunches and air shows; is it really possible we?ll find the romantic hideaway we are looking for? When the hotel itself swings into view ? a bizarre swoop of gleaming glass laced with ribbons of shimmering steel ? more questions are raised:

?Where in the name of Orville and Wilbur are you taking me??
?The out-of-town headquarters of an international petrochemical business, it appears.?

But, as anyone who has spent time in Thailand?s nightclubs will tell you, appearances can be deceptive. The Aviator may look like a well-designed conference centre, but inside it?s a very different beast. Our jaws plummet upon entry. We?re looking at a dramatic central staircase that comes pouring out of the first-floor balcony in a curve of cream. Above, another three circular balconies ring the space up to the rooftop. For a moment, we wonder how we?ve ended up in the New York Guggenheim, then a slick-suited concierge scoots into view and pinpricks our wonderment with a beaming welcome. 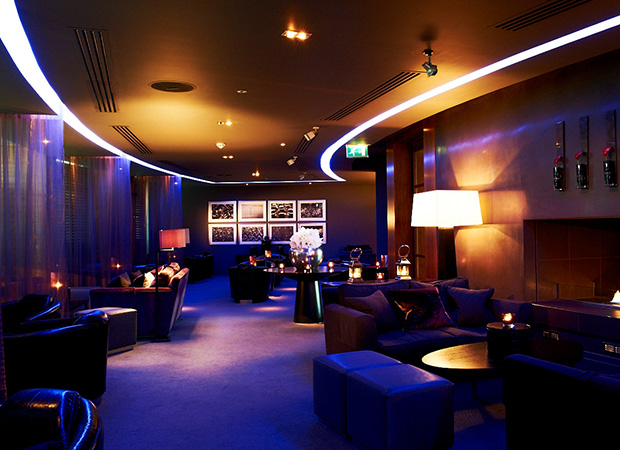 We’re led up the grand staircase, past the flickering open fire and velvety sofas to the first-floor front desk. At some point while we’re signing forms and handing over cards, two cocktails miraculously appear beside us ? I swear I didn’t see anyone come over with them. The woman on the front desk (also smiling ? this appears to be part of the uniform) asks us what brings us to the Aviator.

‘We’re here on a secret mission to determine whether it’s actually possible to have a romantic weekend at a novelty airport hotel in Hampshire’s industrial hinterland.’

‘Well, we’ve never been to Hampshire?’
‘We’re looking for a chest of drawers?’

?is our simultaneous and unintentionally surreal response. The receptionist doesn’t blink and, seconds later, we’re presented with a map marked with the location of the nearest antique centres.

‘And we’d quite like to go somewhere nice for a pub lun?’

Another map appears, with The Swan handily circled. With our weekend quite literally mapped out, we trot off to our room, whisperingly wondering whether they have a pile of pre-annotated maps covering every eventuality and a midget mixing drinks under the front desk.

Aviator has a staggering 169 rooms, which makes me wonder how we can call it ’boutique’, but I very quickly realise that despite its capacity, the hotel is cleverly designed to preserve the illusion of intimacy ? like that first, rejected Tardis model, it feels smaller on the inside. And the room itself doesn’t seem like a suite for a suit. Sure, it’s got all the desk space and free WiFi the average CEO could possibly need, but these sleek woodsy interiors, abundant mirrors, cosy armchairs, and the knock-out view of the airfield dotted with lights at dusk are crying out for appreciative couples. Mrs Smith is enraptured by the little planes taking off and touching down (quietly) right outside the window but I, being a true Mr Smith, I make straight for the flatscreen and scroll through the niftily integrated movie and CD library ? it’s like having a branch of Blockbusters and a very trendy jukebox trapped in your TV. By the time Mrs Smith’s earmarked which toiletries will find their way into her washbag, I’ve soundtracked our stay with the coke-addled melodies of Bowie’s Station to Station, and decided that our evening’s entertainment will be much-loved assassin caper In Bruges.

But first, dinner. And before that, cocktails in Sky Bar. There’s a terrible moment when Mrs Smith’s habitual martini arrives with a twist of lemon rather than the promised olive, but our waitress must have glimpsed the rising fire in her eyes and swiftly diffuses the situation with a new one ? made from scratch, no less; none of the picking-it-out-with-a-cocktail-stick you get in lesser hotels. Our meal is equally accomplished. The Brasserie menu has the Aviator’s biggest nod towards the macho business world: steaks. Big juicy manly steaks for big juicy manly men. Thick, pink and with a fabulous woody char to the taste. There were other items on the menu, I’m sure; I just didn’t notice them.

The next day, we explore.We’re in the perfect spot for pootling around shady country lanes, nipping into antique fairs, supping in wayside pubs and generally having a right-old rural road trip. And it’s brilliant. By the time we get back to the hotel, we’ve a car full of pick-your-own courgettes, second-hand books, half a dresser, a chest of drawers (hurrah), and two very contented weekenders who now know the answer to their question ? it’s not only possible to have a romantic weekend staying at the Aviator, it’d be difficult not to.

As we check out, we ‘accidentally’ overhear a pair of indeterminately European men enquiring about the long-term availability of a room in two months’ time. They seem very insistent that it should have a safe and are equally adamant that they’re unable to book in advance. As we drive home, we can’t help but speculate. Hmm, two men, with unidentifiable accents, who need a safe, for a substantial period of time, next to a private airport, but can’t make a definite booking. For a moment, we convince ourselves that we’ve just solved the mystery of UK’s biggest jewellery heist, but quickly dismiss this as a compelling flight of fancy. Just like the Aviator, really.

This Summer, enjoy a two night Bank Holiday stay with complimentary dinner in Aviator’s two Rosette Brasserie from £125 per night. Fnd out more.